“It is one of the most important holidays of the year in Sweden, and probably the most uniquely Swedish in the way it is celebrated…”

Thus, as every year, we celebrate the Summer Solstice out in the nature. Of course, like all holydays here, it is celebrated on the eve;
So on Midsummer’s Eve two of Ronnie’s girl-friends invited us to their lovely Midsummer wedding.
(Yes, same sex marriage is legal here in . Yes in a church too. Yes the church accepts it)

We took the local train at and traveled for 30 minutes into the beautiful jungle-green suburbia. We stopped at Rönninge and from there we took the bus for a couple more stations to Salem where the beautiful church was. 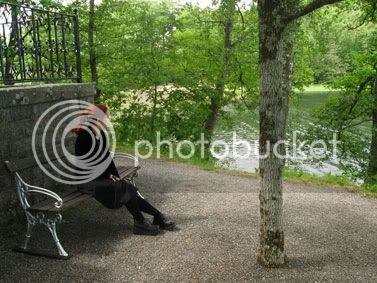 We got there 40 minutes early so we had time to walk all around the gardens and the burial ground and relax under the huge trees looking at the beautiful lake listening to nature singling. 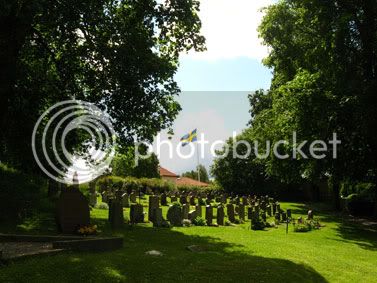 (when no one is nagging me I take really good pictures :p)

The ceremony was we bit delayed so we listen to the wedding song on the organ playing on and on for about 10 minutes and I thought … oh crap I thought these things happen only in movies! But the girls finally appeared, all beautiful in their bridal clothes, smiling happily. The priestess was a very young and very likable woman, with the most peaceful and calming voice.

I have to make a note here and say here that this wedding was special because one of the girls is Swedish but the other one is from and all her family was here. Since her parents don’t speak Swedish they decided to have the ceremony translated. So the priestess would take pauses for the Italian dude to repeat everything in Italian. I tell you, this language (Italian) in a church is very poetic. I felt I was in a mafia movie and then I thought the antichrist will appear from the church's bell tower. Italian in a church can be very scary yet very beautiful.
Yes, I have seen one too many religion-based horror films and in all of them the priests speak Italian in the church. What can I tell you? I’m baptized inside horror scripts.

It was really beautiful. The songs and prayers are so soothing in a Protestant church. I hate religion and everything it stands for, but I understand how people like to fool themselves with it. Especially inside a church like that one can easily find nirvana.

After the ceremony we waited for the girls to come out to wait for the bouquet throwing and the “rice” throwing.

Yet another note here.

It was a custom many years ago, to throw rice at the couple in weddings. But it’s been some decades now that people stopped doing this because rice kills the birds when they eat it (it expands in their belly and kills them from the inside like a slow  grenade). So people started throwing other things that birds don’t eat, like confetti for example But then, that is littering the area with crap and someone always has to clean up after you. So now we throw bird-seeds. It is triple smart, because a) no one has to clean after you, b) you get to go on with your silly tradition on throwing things at couples, and c)  you actually are feeding the birds.

Both the girls had bridal bouquets and one landed to the person in front of me. Even if it would land directly ON me I wouldn’t catch it because with one hand I was holding the umbrella, since it was PISSING rain at that moment, and with the other hand I was …. what else? …. Taking pictures of course.

The weather by the way was the weirdest weather I have ever encountered. It was changing every 20 minutes. But totally changing. As I said it was raining like a mother when we got out of the church, as if the skies opened up and all the water from the heavens tried to escape. So there we were Ronnie and I, under the smallest umbrella (we forgot to get our umbrella so we had to buy one from a supermarket on the road) with the rest of the guests outside the church in the middle of nowhere, in the most vicious rain. Some people with cars volunteered to give us rides to the station from where we would take the train to the party location. Just as the car was about to come and pick us up. The rain stopped instantly and a CRASY sun appeared in the sky and within 3 minutes EVERYTHING was dry and the sky was bluer that the bluest blue!!! This went on the ENTIRE day! I loved it!!! Midsummer weather!

These particular pictures are taken with 5 to 10 minutes time from each other.

People don’t know what to do with their umbrellas.
(by the way I LOVE this car. More pictures in the album)

In the car rain again.

We got our ride to the station and we traveled in the lovely party location near the city in Aspudden. It was a very charming garden were you can look at their pretty flowers and herbs and you can pik nik around or sit at the pretty caffé.

this is for M

We stood around the gardens for a while, drinking champagne, wishing to the happy couple. Then it was time for midsummer tradition. We danced to an opening of the garden further from the café, where the Midsommarstång (a.k.a. midsummer pole or May pole) was lying on the ground, all ready dressed with flowers. We rose the Midsommarstång  we all danced around it as the tradition indicates. The frog dance and so on ;) The Italians were a little confused  but there was this lovely girl giving instructions on how to dance so there weren’t many toes stepped on. We got some pictures but Ronnie decided to take a video too so here I am, happy as a merry go round :D

After this we ate the fantastic food. It was a great buffé inside a greenhouse. So lovely!

most of the Italians and the Priestes hitting the dancefloor

Here the weather really can’t decide what the hell to do … it is shining only on Ronnie! 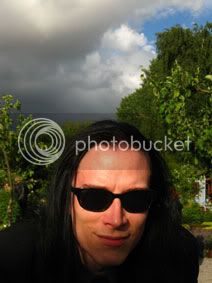 And since the sun never sets this season, the party went on loooong after we left …

Also there are 2 videos here

In case you can not see the videos above here, you can check the following links: