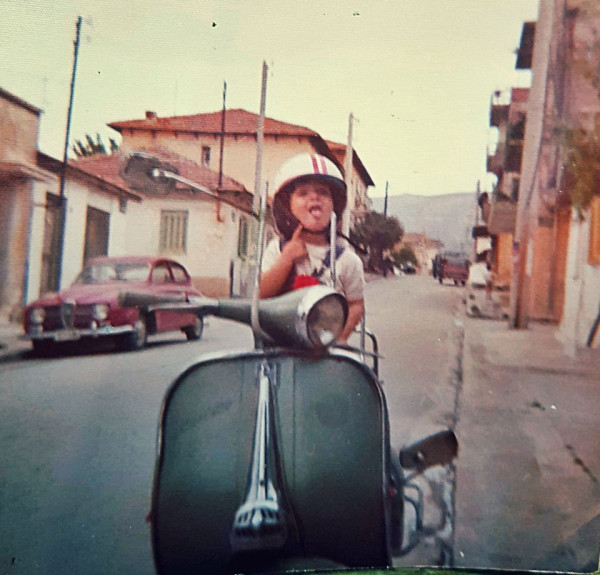 So my sister found a picture of me on my uncle's vespa from sometime in the end of the 70s
What is interesting in this picture though, is that I had never seen it whole, I've only seen it cut, so my father's SAAB was not it the picture.
This is the only picture of my dad's SAAB 96 v4 (could be 1965, 66 or 67). I never thought I'd see it again.
I kind of grew up in this car.
We took many many really long trips around Greece with it during my childhood. Many of them just the two of us. He would put me to bed at night and tell me: "When you wake up tomorrow you will be in the car in the back seat, with your blanket and your pillow and we will be on the road and you will look outside the window and we'll be out of Athens and you will ask me: "Dad where are we?". So in the morning very early he'd come to lift me with my covers and my pillow and I ofcourse woke up but I didn't want to spoil the story, so I'd pretend I was still asleep. He'd put me in the back seat and start driving and I'd wait and wait and eventually get up and say : "Dad where are we?" And he'd laugh.
And I would always ask questions like: Where are we. How fast can we drive. Could we float in the water. Could this car turn into a submarine. Why is the moon following us. And he seemed always amused.
If the trip was long and we had to sleep, he'd tuck me in the back seat to sleep and he'd sleep outside the car by my door and he was usually freezing.
He took me with to work many times and let me in it to play, so the car was also my babysitter.
I used to dismantle the glove box doors (It had two doors, one big and a smaller one on the big one) and I'd put them back together several times, pretending I was a mechanic.
I took my first and only driving lesson in it with my dad when I was 15. My dad was NOT a good teacher, he was yelling the whole time of that lesson, so I didn't want to try ever again haha. But for many years I used to have vivid dreams of me stealing it and driving around. And sometimes I got to sleep in it when dad wanted to stay a little extra at the restaurant and I was bored and sleepy. (yeah I know, not great parenting haha, but it was the end of the 70s and the 80s. People didn't know better back then. I turned out alright though

)
He, very often took me and my sister for night car rides, and he'd drive up on the mountain at a spot that was flat and big like a tennis court and he'd spin the car round and round really fast and we'd laugh and scream as if in a roller coaster, and the night smelled like jasmine and thyme and exhaust fumes

This one is such a clear memory.
I LOVED that car!
Noone else had a SAAB in Athens back then. Noone that we knew of at least. And I don't remember seeing any other SAAB on the street even by chance, ever. At least not one looking like my dad's.
So it was a bit like a celebrity car. And my dad got offers to sell it many times by people who approached him in the street. He always smiled proudly and said: "not for sale".
Plus it had this very particular sound, heavy with a deep bass tone, kind of like a double lory.
Everyone knew when dad was near with the SAAB. Even our cats would hear him from two blocks away and run to the door to welcome him.
He was kind of forced to give it away in the mid 90s when the European Union tax regulations changed for old cars and they were offering new cars in low prices with the withdrawal of the old and high taxes if you kept the old. And he could not afford having two cars.
So he had to make the change.
He kept the SAAB sign from the front and that's all that is left of it after they mushed it into a giant cube.
I remember my dad coming back from the car junkyard looking like he's been at a funeral.
It was the end of an era.
It feels though as if it was our destiny, (and I am saying this in a silly way) that me and my sister started our lives inside a Swede.
Since we both migrated to Sweden

I would love to own a car like this one day.
Maybe towards the end of my life. Assuming I won't die soon by... whatever.
This was a little story about the "Knob", like my mom used to call it.
It was red, then dad had it painted black and red, then red and black then black again.
A color combination that follows me to this day.

EDIT: After my sister read this story, she told me that she also had this dream of stealing dad's car and driving around. With the exact same feeling of excitement and a bit of dread for many years 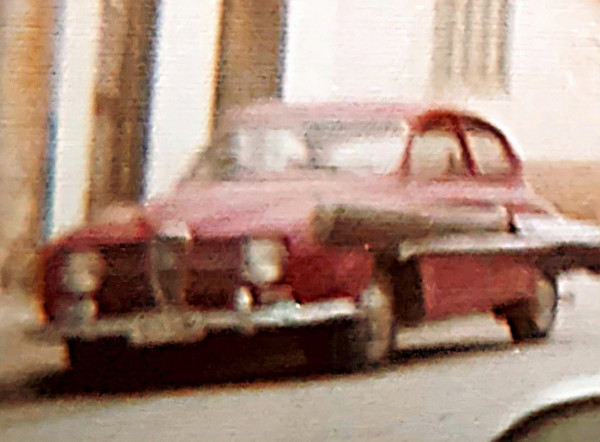